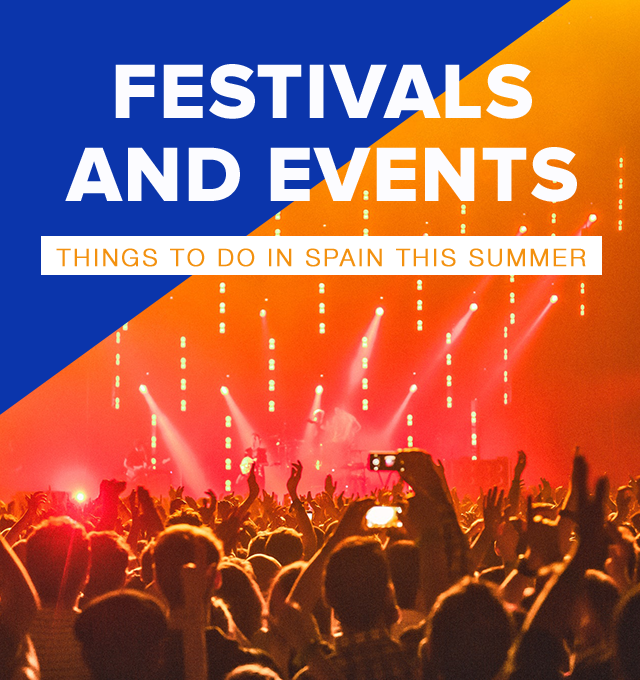 THINGS TO DO IN SPAIN THIS SUMMER PT 1: FESTIVALS AND EVENTS

In this latest blog series, we’ll be exploring some of the alternative activities you can take part in Spain this summer, on top of the usual sunbathing.

If you’re thinking of moving to Spain but are worried you’ll be missing out on some of the festivals and events littering the British calendar this summer, fear not! Spain has just as many, if not more, festivals and celebrations, and of an even wider (and colourful) variety. Below we list some of the most interesting and unique ones, including when you can attend them.

Occurring at the end of every June, these celebrations mark the start of the wine harvest in the country. The culmination of the festivities occurs on the last day of the festival, every June 29th, La Batalla de Vino – The wine battle of Haro!

During this party, a huge water fight ensues – with water replaced with red wine! Using hoses, buckets, sprays and anything available, wine is thrown by the gallon over the patrons, who are usually dressed all in white.

This spectacle must be seen to be believed, and if you can bare to see the waste of so much good wine then it is certainly one for the bucket list!

A vibrant neighbourhood in Barcelona, Gracia’s annual festival in August is one of the most iconic in the region. The area is filled with themed art installations, decorations, and colourful lighting, transforming the streets into artistic playgrounds for visitors to enjoy. An abundance of street performances, firework displays, parades, outdoor markets and street food also make for a lively festival atmosphere.

Visitors can also see away the evenings with an outdoor impromptu musical or theatrical performance. One not to be missed!

Similar to the Haro Wine Festival, this annual event at the end of August marks the final leg of the Spanish grape harvest. The premise is simple – tonnes upon tonnes of grapes are delivered to the town centre and then they are used to create a massive food fight!

The grapes are thrown and smeared over everyone in a jovial and messy afternoon. Don’t wear new clothes!

Every 23rd June, St. John’s Eve is a celebration held in honour of San Juan (St. John the Baptist) and marks the start of summertime in Spain. This date is celebrated in numerous different regions throughout the country, but even more so in Catalonia and Valencia, especially along the coastal areas. Large bonfires are held on the beaches, with BBQ’s, drink and firework displays rounding out the evening into the early hours and eventually, sunrise.

Although not recommended, many bonfire parties involve games and traditions such as hopping through flames or crossing the hot coals barefoot! Though you can probably get away with a safe traditional dance around the moonlit fire.

Whilst it’s highly controversial, Bull-running is a Spanish tradition. It’s not for the faint hearted, with it posing such a high risk of injury and likely increase to your health insurance!

The village of Mataelpino agreed with this outlook, and has replaced their bull run with a… ball run! Known as the boloencierro, and held every August, participants are expected to run as fast they can whilst evading a 3 metre-wide, 150kg plastic ball – easier said than done! It still retains a trace of the traditional bull run – an angry bull face is generally painted on the ball.

One of the most famous of all of Spain’s festivals, La Tomatina is a traditional festival held every August in Bunol. Running for over 70 years, it has gained a huge international following and attracts around 20,000 participants every year! The aim of the festival is simple – people throw tomatoes at each other in one of the world’s largest food fights! (Seeing a theme here?)

The festival itself runs for a whole week and is filled with parades, markets and performances, with the tomato throwing celebration occurring on the last day. A unique event that has gained a cult following, grab your tickets early for this one!

Like the UK, Spain has many music festivals occurring in the summer season, with the bonus of having great weather and (generally) no mud, rain or wellies in sight! We listed some of these in a previous blog post on Spanish music which you can read here.

If you think it’s time you experienced some Spanish festivals first-hand by buying your dream home in Spain, get in touch with our Spanish property experts on 0800 011 2639 to discuss your options. You can get more insight on Spanish culture from our previous post here.