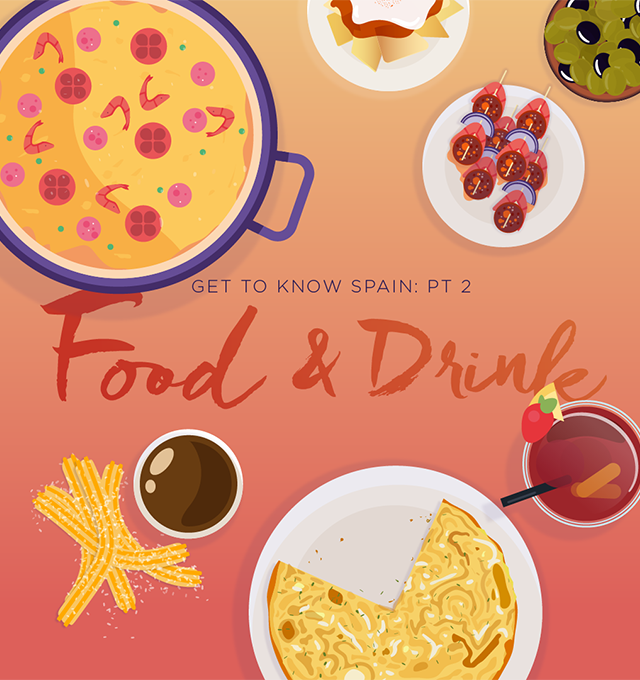 THE BEST OF SPANISH FOOD AND DRINK

Spanish food tops our list of Mediterranean cuisines. Holding its own, along with Italian and Greek, it’s a popular choice for many and is a huge part of the Spanish culture. Whilst some tourist areas serve poor imitations or varieties of the below dishes and drinks, there are a range of authentic gems around for you to experience the delights of true Spanish cuisine – just ask our team where your nearest one is! We’ve compiled a list of 5 of the best foods and 5 of the best drinks to be enjoyed in Spain…

Tapas - Most often served when ordering drinks (often free in some regions), tapas comprises small dishes of finger food, served hot or cold. Some popular tapas dishes include patatas bravas, croquets, Spanish bruschetta with serrano ham, Polenta, salads and many more! There’s something for everyone really.

Paella - one of Spain’s most well-known and popular dishes, Paella originates from Valencia, where farmers would whip up some paella during breaks from whatever was available to hand. Although generally made from a base of rice and stock, the other ingredients can be whatever you fancy, such as tomatoes, onions, spinach, seafood and red meat. There is even a national paella day – read our previous blog post on it here...

Gazpacho - A refreshing vegetarian soup, served cold. Generally, a blend of tomatoes, onion, pepper, cucumber, spices and served with bread and olive oil. A perfect dish for cooling down in the afternoon heat.

Tortilla Espanola - Better known as a Spanish omelette. Easy to make and delicious, this simple meal consists of onions and potatoes fried in olive oil and then combined with egg. Perfect as a main meal or snack.

Churros con Chocolate - Very popular across the pond in the States, Churros are in fact another Spanish export! Fried dough, cinnamon sugar and chocolate dipping sauce – there’s nothing not to like about this. A bonus is that it is considered a breakfast meal in Spain!

Sangria - The perfect accompaniment to any meal in the sun, Sangria is a red wine cocktail mixed with juices and sometimes combined with other alcohol like rum or schnapps. Include fresh chunks of your favourite fruit and lounge with a jug in the sun.

Cava - Simply Spain’s version of Champagne, it is cheaper and just as tasty. Consider it next time you fancy a bubbly! (Maybe when celebrating your new Spanish home?)

Coffee - Spain has a big coffee culture, so early risers will feel right at home. Find a local café and try an espresso, the favoured caffeine heavy beverage in Spain. Many regions have their own variations so use this as an excuse to find your favourite.

Gin & Tonic - Gin is now one of the most popular spirits in the UK, but unfortunately for those tied to the British Isles, Spain is the country that has perfected the G&T. Served in large copa de balon glasses and with ever increasingly extravagant garnishes like cinnamon sticks or exotic fruits, it’s hard to argue! If you’re still not a gin convert – perhaps ease yourself in with a homemade G&T ice lolly.

Horchata - A refreshing drink made with tigernuts, water, and sugar, and served over ice in a tall glass. It is also frequently enjoyed with a plate of fartons (don’t be put off by the name!) – sweet pastries made specifically for dipping in the drink.

Discover Spanish food and drink for yourself whilst looking for your dream home. Book a one-to-one viewing trip today where you’ll view locations of interest and a range of properties suited to your exact criteria and budget. Call our team today on 0800 011 2639.

Back to blog
10 BEST FACTS ABOUT SPANISH CULTURE